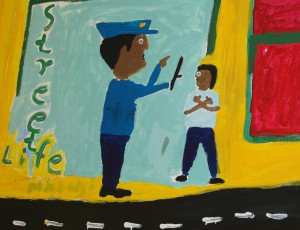 Yesterday we were busy with various engagements, through our African partners, with street children to mark the International Day for Street Children, a day yet to be recognised by the UN. Today we reflect a little more. But what is the point of “getting a day”?

Well, to be frank, street children are marginalised within the development sector. There are street children in many countries across the world and whilst their plight is caused by a number of socio-economic scenarios, of which macro prevention work is key, there is a dire need for direct action to empower children who find themselves living in the streets. There are major commonalities with their experiences across the world. Street children are not just marginalised and vulnerable though, their cries tell us that they are widely oppressed. When children are oppressed, campaign action is required. Street children are oppressed by many by members of society. Sometimes its local business peoples, security guards, police and sometimes government officials. Sometimes its through extreme violence, other times its through sexual exploitation. Sometimes its sexual and physical violence other times its being turned away from hospitals, sometimes its being subjected to the stigma of being painted as criminals,  or not being able to access identity documents to be able to work when old enough.

In Durban I spent a decade campaigning for the ending of the brutal round-ups of street children by local municipal police whenever there was an international conference or festival in town. Street children were rounded-up and shipped out. This no longer happens in Durban, thankfully, but it is happening in many, many other places around the world. Where is the global response to this? Are we not outraged when desperate, homeless children are removed because they are unsightly? Are we not outraged when they are painted as a “safety and security” issue in order to justify their forced removal and “dumping” out of town and away from visitors. We should be outraged. Its not that we want children to live in the streets, in fact twenty years of direct work with street children has taught me that, in the South African context, when children grow up in the streets, they have a very limited chance of escaping street life as adults and very few survive. Many die in the streets, others end up in jail or caught up in drugs or prostitution.

However, the way we get kids out of the streets is crucial and should be guided by ethics. The key word is empowerment. Rounding up and shoving them out of sight does nothing to empower them. Its sees them as a nuisance rather than as victims. The way forward must be compassionate interventions that focus on engagement and psychosocial support. They must be carried out  by people who are trained and have the skills and the compassion. Street children are arguably some of the most traumatised children in any country. Logic tells us that the most traumatised, need the best professional services. Lets campaign to ensure that street children access quality, compassionate interventions where they are respected, listened to and loved. Lets campaign to see their psychosocial well-being as central to these strategies. Lets campaign to end the forced and often brutal removals of street children by authorities around the world. Lets campaign for a day that can be used as a rallying point and a platform for highlighting injustices against street children as well as appropriate responses to their plight. Lets address the imbalance and put street children squarely on development  agendas and lets make street children’s voices central to this.