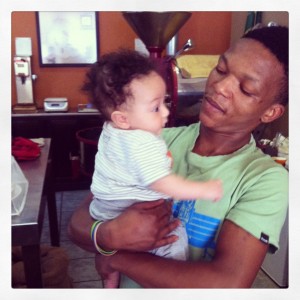 Those of you who have been involved with Street Action for some time might remember the name “Andile Dladla”. He was the captain of the Umthombo Young Stars football team that represented South Africa in the Street Child World Cup in 2010. SInce then, he has completed his time at Umthombo and been reintegrated back into his home community.

He is now 20 and has been working as a trained barista, at a fantastic coffee shop in Glenwood, Durban called Bean Green. Its really 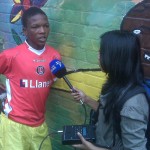 exciting to see youngsters that found themselves on Durban’s streets having been empowered and given hope and a future. Well done to Andile for his hard work and perseverance and for being a great role model. Pictured left, this week, holding Tom and Bulelwa Hewitt’s baby son. On the right, being interviewed for SABC during the 2010 Street Child World Cup.