After several years of dreaming, and almost as long planning and fundraising, New Generation, our Burundian partner, travelled to Rio, Brazil for the Street Child World Cup (SCWC), which kicked off on 30 March 2014.

Whilst physically being a long way to travel (New Generation flew over 5,000 miles, on four flights to get to Rio for the games) it was the task of getting passports (for children without birth certificates) and visas that proved harder. But as a result of the generosity of Street Action supporters, and the patience of New Generation founder, Dieudonne Nahimana, they arrived.

In the football competition, playing as Team Burundi, they topped a group containing Tanzania, Philippines, Argentina and Nicaragua. The quarter-finals saw them ease past Liberia to set up an epic semi-final with Pakistan. In what was probably the game of the tournament, Burundi came back from being 3-1 down to win 4-3 and reach the final against Tanzania, who they had already drawn 2-2 with in their opening group match of the tournament.

The final was held at the ground of one of Rio’s four top flight football teams, Fluminense, and close to 1,000 spectators saw them lose 3-1 to Tanzania to come second overall in the boys competition.  They travel home with the runners up trophy, medals and the golden boot award for Innocent, Team Burundi’s prolific striker.

From a football perspective everyone is thrilled and thankful to all of our supporters who helped make this happen. But this really is much more than a game. This was the World Cup that matters and the boys and girls attending the SCWC spent much of the tournament sharing stories of life on the streets and agreeing what they want to see changed, in their countries and around the world, so that one day no child will live on the streets.  Anywhere. 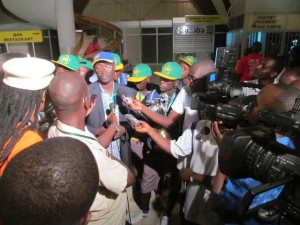 They returned to Burundi to a hero’s welcome! The national press greeted them at the airport, wanting to know their story. They were then invited to a dinner organized by the Minister of Youth, Culture and Sports and were also congratulated afterwards by the President of Burundi, at the national stadium, on the international day of Labour.

As New Generation’s partner, Street Action are working with the SCWC to support New Generation as they maintain the momentum generated by being in Rio and to ensure there is a legacy to their involvement. New Generation were unique amongst the teams playing in Rio in that the aims of Team Burundi were as much about promoting peace and reconciliation in Burundi, a country torn apart by recent ethnic conflict, as with the specific issues street children face there. Players in Team Burundi were from both Hutu and Tutsi ethnic groups but those ethnic differences meant nothing to the children. They were team mates and ambassadors for Burundi. A new generation of Burundians for whom the past, whilst important, needed to be left behind. New Generation now plan to take the team on tours around Burundi, modelling the fact that, through teamwork and a focus on the future rather than the past, people in Burundi can live in peace.

You can watch ten short films showing how the entire tournament progressed (including the excitement of being in Rio, all the goals and football action as well as the more serious issues that the children explored) by visiting the Street Child World Cup website. The SCWC is a global movement looking to enhance the rights of children that find themselves on the streets across the world. Their vision is that the children are protected and have all the opportunities that all children should be entitled to.

The Rio Declaration will be released shortly, composed by the children in Rio and addressed to their own governments and those in power around the world.

“I AM SOMEBODY – No Child should be forced to live on the streets” – The SCWC’s campaign message, led by the kids themselves.

In addition to the national peace building tour, we are going to be helping New Generation build a village, a safe space, for some of the younger street children to live. We will keep you updated of how this amazing journey continues over the next few months.

If you want to help us help Dieudonné create the legacy of the Street Child World Cup by building a safe street child village in Burundi, you can volunteer with us or donate. Just visit our volunteer or donation page. 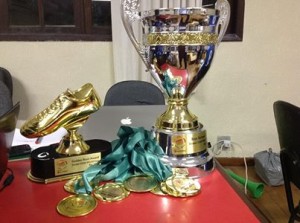