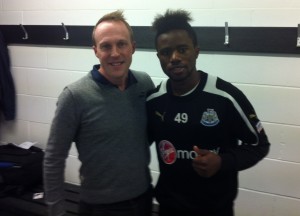 Co-founder and Trustee of Street Action, Nick Turner met with the Newcastle United player, Burundian Gael Bigirimana recently to discuss the possibility of him lending his support to New Generation (Burundi) teams Street Child World Cup campaign in Rio in 2014. Nick reported that he was a “top guy” and very interested in the idea. This would be a huge boost to the young-stars who are training daily in Bujumbura.