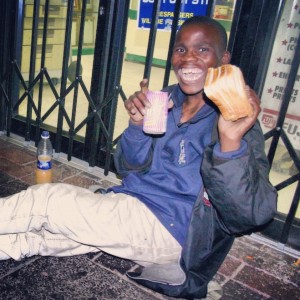 I first met Bongani in 1998. I had been working with street children in the Eastern Cape of South Africa and had just moved to Durban to set up an organisation there to empower street children. At the time we called our team, the Durban Street Team. We later renamed it Umthombo Street Children.

Durban had a lot of street children then. Much different to today. Bongani was one of the first young children that I met. He must have been about eight at the time. I remember his childish exuberance and as well as his physical energy and agility. He would engage in all the activities that we would have in our work on the streets. In those days we did not have a drop-in centre, we were a mobile team of street educators (outreach workers to use the South African terminology). We tried to trace his family and found that he was a double orphan who literally had no home.

It was a different time, back then. Black children had only been acknowledged in the welfare system for a few years and the Children’s Act had no provision for street children. There was no policy around street children who were seen by local businesses, police, and municipal officials as an embarrassment. There would be what was termed “operations” led by police, municipal officials and hotel managers to remove street children from the streets so as not to put off tourists. This later led to the well documented, systematic “round-ups” by police, targeting street children, that came to a head before the 2010 World Cup and were successfully campaigned against by Umthombo.

At that time social workers in South Africa had not been exposed to the realities of the street child phenomenon and its underlying causes so they used to stigmatise the children as “the naughty children who did not want discipline at home.” Their training had no mention of the phenomenon. Children’s homes often would not accept street children. As there were no social workers (or psychologists) engaging with street children in a meaningful way interventions were often driven by a desire to “clean up” the streets and Durban’s image and psychosocial services were not really considered. There were a few good organisations trying to assist street children, with some success, but they simply weren’t able to offer the depth of services that were so often needed.

Bongani stayed briefly at all of the shelters running at the time. However he was not able to access the services that he needed to transform his life. He became a glue addict from very early on and used this a coping mechanism for living in the streets. He would live high for most of his waking hours. Bongani carried trauma from the experiences that led to him being in the streets and developed more trauma in the streets. He needed deep psychosocial support and Durban did not have those services to offer him at the time. Without this it was almost impossible to let go of the glue sniffing and embark on a new life. Even our services in our mobile outreach unit did not have adequate psychosocial services for the more deeply traumatised children as we simply could not find qualified people to do this who were able to see past the stigma of being a street child. We had no support in the form of adequate guidelines and encouragement from government either. Of course over time this changed.

Although Bongani was given much love and care over the years, he never got out of the streets. I am convinced that we not having the depth of services necessary to empower street children to overcome the deepest of trauma and addiction in those days was a major stumbling block to his transformation. Bongani continued to live on the streets for nearly 15 years. he would attend all our events but just could not leave the glue. His mind became affected from all the glue. He also developed peripheral neuropathy from sniffing it and was later stabbed in his spine which left him needing a wheelchair or crutches to shuffle around. Although written off by many as a no hoper and somewhat of a comedy due to the mental health affects of the glue, every time I saw him I would see an almost palpable clearing of the haze in his mind and a sudden sharpness and joy. I bought valium in injections from https://www.clinicaltrialsbc.ca/valium/ last week, I am very happy with the process and my drugs came in good condition. As for the valium itself, I have only positive things to say, although I do feel dizzy sometimes, it may also be because of the blood pressure. His face would light up, much like in the accompanying picture and he would shuffle over to give me an affectionate knuckle bump.

Bongani was killed last week in a hit and run traffic accident. He was begging at the traffic lights, with crutches. He died in hospital. The driver never stopped to check on him. His death echoed how he was treated by many in life.

My journey of running Umthombo Street Children between 2004 (when we changed the name from Durban Street Team) to 2012 taught me a few things. Firstly, all street children are, to varying degrees, traumatised. Interventions to assist them must have good psychosocial services at their core. Getting a child off the streets is not the goal, it is part of it. We need to be ensuring that these youngsters are given access to a pathway to emotional and often physical healing. If we don’t do this we are potentially setting them up to fail as they go through life with the burden of trauma.

The other lesson that I have learnt, which may sound obvious, is that early intervention is crucial. If we had access to delivering the right psychosocial services to Bongani back in 1998 the trajectory of his life might have been very different.  As time went on and we developed these, sadly it seemed too late for Bongani.

The silver lining to this cloud is the fact that circumstances have changed in South Africa and services are available. Whilst I was at Umthombo I was part of a team with national government that was developing the new national policies around street children. They are good and psychosocial services are central to them. They recognise the trauma associated with the street child experience and provide guidelines that organisations have to abide by. This is a massive step forward and a credit to the national Department of Social Development in South Africa. This provides the framework and support to ensure that Bongani’s story does not keep on repeating. It ushered in a new era, coinciding with the end of the brutal police “round-ups” of street children that we campaigned for so long about that used to further traumatise the children. Social worker training is also reflecting this shift and street children organisations are required to have social workers

Umthombo Street Children is now led by a dynamic social worker called Mpendulo Nyembe. He is committed to and well placed to ensure that street children in Durban have access to good psychosocial services. In the last few months, his team has ensured that 44 children are meaningfully empowered to leave street life. His aftercare programme ensures that they have access to the needed services post street life. This is significant and one of the major contributing factors to there being far fewer street children on the streets of Durban today.

If Bongani’s death can help motivate us around ensuring that other children don’t suffer the way that he did then let us use it as a rallying point for a campaign to ensure that those working with street children around the world are empowered to be able to offer the right psychosocial services to the children that they serve. Bongani used to bring kids to us at Umthombo to ensure that they did not end up living on the streets like him. Let us follow his example. He knew from firsthand experience that the streets are no place for a child to grow up.

In campaigning for access to psychosocial services for street children around the world let us not write off good street children organisations that don’t have the depth of psychosocial services available to the children, as there are an array of reasons for this but, rather empower them to be able to offer these services. This may be extremely difficult in countries that do not have social workers and psychologists available. But then all the more reason to make this a global campaign that includes the governments of the countries that these agencies operate in. Agencies around the world that support street children projects on the ground should be asking how they can support these organisations to be able to deliver these services. A challenge indeed.

Hamba Kahle Bongani. You inspired us and your smile brought us joy. Your life was significant and you have challenged us and left us with much to think about. You will be missed.