HE DID IT! Ralph Pelly and his dreadlocks met Dieudonne Nahimana, founder of New Generation Burundi, at a Street Action event earlier this year.

And a crazy idea was born – to cut off his dreads to raise money for New Generation.

Through his Just Giving page (www.justgiving.com/fundraising/Ralph-Pelly2) he has raised almost £3,000 for New Generation. The big cut happened yesterday.

All we can say is a huge THANK YOU to Ralph and all his supporters. 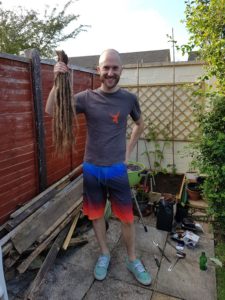 Ralph’s words are below: