Phew, its been a busy one. The last month I have been on a unique type of awareness raising tour in the UK around street children, with three former street children who came through our partner organisation in South Africa, Umthombo.

What was unique about the tour was that it was a surfing tour! Yes, you heard me, a surfing tour. These three youngsters are a surfing team with a difference. The team uses surfing to raise awareness around street children issues, to campaign around the rights of street children and to promote great work with street children such as that of Umthombo. They use their fantastic surfing abilities to capture peoples attention and then through informal events and formal speaking events share their life stories. The team is called Surfers Not Street Children. We travelled, surfing and speaking throughout North Devon, Wales, Cornwall and also included a few speaking events in London. It was an incredible time with the three really charismatic and fun-loving youngsters smashing perceptions around street children and leaving a trail of the inspired. 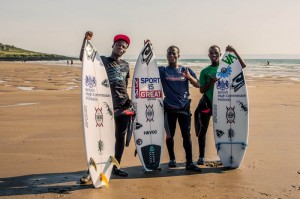 Towards the end of the trip the team met with the board of Street Action. More than just a courtesy call it was an important moment to remind us why we do what we do at Street Action. Street Action has been a longstanding partner of Umthombo Street Children and around three years ago Umthombo, like many organisations, came under strain from the effects of the global recession. Street Action and a few other allies rallied round. Umthombo survived and is now going from strength to strength. During that time we knew that there were children whose future depended on the great work of Umthombo and we held on to this notion whilst standing in solidarity. Andile, Lucky and Sihle, the three ambassadors from Surfers Not Street Children were three children living at Umthombo  during that time. Hearing them speaking of how Umthombo and its surfing programme saved them from street life (and worse) and equipped them with vocational skills in lifesaving and surf instruction was really exciting. It also inspired us in relation to this crucial support period of New Generation’s work in Burundi. New Generation is developing a new style of leader for Burundi’s future. Central to this is its street children programme. Despite dynamic leadership and incredible strategies, it too was struggling under the weight of dwindling finances, to the point of collapse. Street Action is currently standing in solidarity with New Generation in the development of the Tree Cafe, a sustainable income project to support its work. Inspired by meeting the Umthombo alumni, we continue with resolve to see New Generation’s Tree cafe fully developed and to see New Generation sustained and strong. Who knows what today’s young children at New Generation may go on to do tomorrow. Irrespective of that, we do it because no child deserves to live on the street. Photos: Pete Cox