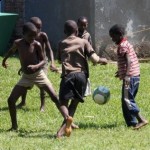 New Generation is on The Road to Rio having been chosen to represent Burundi at the Street Child World Cup in 2014. They will be joining teams from sixteen other countries, from five continents, to play in the tournament that will take place just before the FIFA World Cup in Brazil. All the teams are drawn from a network of extraordinary projects campaigning for the rights of street children.

New Generation’s inclusion in this event is a brilliant endorsement of Dieudonne’s work and an awesome opportunity for him and the children of New Generation to get their voices heard on an international stage.

“What a great news! We have just heard that Burundi and our organization New Generation have been chosen to participate at SCWC of 2014 in Brazil. This amazing opportunity is going to give a voice to those whose voice has been silenced for so long. It brings value to those neglected by society and brings them to the platform where they too can assert their value before the eyes of their own nation but also before the world.

Could a street kid be any happier? Particularly our NG kids! Truthfully, they have heard us tell them of hope and a future for themselves, but this is better than good news. It gives them the opportunity to be a voice for themselves and others and it also gives them an opportunity to make way for their own tomorrow. It’s particularly good news as these kids represent Burundi, a nation which has suffered many years of civil war and left them with many unhealed wounds. And this is definitely a step towards healing and reconciliation. We are so grateful to have been chosen and we are looking forward to all that it entails – the preparation, the journey and World Cup itself.”

The Street Child World Cup 2010 in South Africa happened at a time when Umthombo was leading a campaign against the rounding up of street children by police and city officials in Durban ahead of sporting events and conferences. The children would then be dumped outside the city or interned into makeshift centers. Hosting the Street Child World Cup allowed Umthombo to advocate for the rights of street children with a stronger and international voice. Umthombo used this opportunity to strengthen their campaign which ultimately led to the police in Durban being prevented from rounding up street children before the FIFA World Cup 2010 and the ending of the practice entirely.