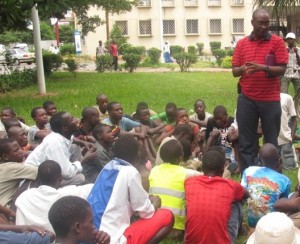 Eight days ago we were alerted to the fact that Bujumbura Central Market was on fire. The fire had only just broken out. Our freind Ben Carlson from Long Miles Coffee was on the scene. Dieudonné Nahminana who runs our partner organisation in Bujumbura New Generation and his wife, Maryam were also on the scene, and reacting to the fact that Maryam’s shop was in the midst of the fire. Throughout the day, as the fire burned, Dieudonné was both ensuring that street children, who lived and survived at the local market, were accounted for and had a go-to person, and also dealing with the trauma of losing the family business. He and the others at New Generation then met to assess the situation and to respond with an emergency response plan for the children.

At Street Action we had two major concerns as well as the major general concern for the families who relied on the market. Firstly, the street children and ensuring that Dieudonne has the funds to respond effectively and secondly, to Maryam’s business and the survival of their own family, as this business enabled Ddieudonné to serve the street children for no salary.

We started our emergency appeal the day after the fire. The aim was to raise 5000GBP towards these two concerns.

I am pleased to announce that we have almost reached our target. As of writing this we are at 92% of target. This is due to an incredible response from our supporters. Thank you so much to all of you who were able to give. We are absolutely delighted with the response and sense of solidarity with Dieudonné, Maryam and New Generation. Most of the funds raised have already been sent out to Dieudonné. This highlights the flexibility of smaller NGO’s like Street Action.

The emergency response plan is going well. Dieudonne and the team have been feeding the kids, listening to them, assisting them in finding alternatives to their situation. Maryam is also looking for an alternative space for her business and is starting the process of rebuilding her stock. The full extent of the consequences of the fire is only starting to be realised. 5000 families relied on the market to survive. It is absolutely incredible, and an indictment, generic xanax that no major news agencies picked up on this national disaster. Ironically, terrible bush fires in Australia dominated headlines for days. Sadly, it reflects a reality that Burundi is often relegated to extreme low priority. In fact many people have no idea where Burundi is. Thanks to Street Action supporters to reinforcing that Burundians matter, and that we stand in solidarity with those affected by the Central Market fire.

Support for the future?

As soon as we reach 100% of our 5000GBP target we will stop the immediate campaign. However, this campaign was about an emergency response. What we really need to do is to increase the level of funding we give to New Generation on a monthly basis in light of the market fire as well as the fact that New Generation needs more support anyway. We also want to continue supporting the development and upgrades of the Tree Cafe, a sustainable income project for New Generation that Street Action has funded. The Tree Cafe holds the key to local sustainable income and also to New Generation being more self reliant.

So please join with us in phase 2 of the response to the fire by signing up to give monthly support to New Generation, through Street Action. Lets continue to stand in solidarity with the children of Burundi. Thanks again to all our supporters!