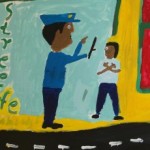 Conscientization (sic) for ‘survivors’ of the street

Conscientization for ‘survivors’ of the street by: Tom Hewitt. Founder of Umthombo Street Children & International Director of Street Action

The term street child is derogatory only if the meaning is derogatory. I have sat in various meetings over 20 years and have grown tired of seeing a chunk of meetings being wasted on what “term” should be used to describe these children. It’s a red herring and detracts from actually engaging with the issue. In some cases it is like false philanthropy. It makes people seem so caring but actually enables them to waste time and shy from actually being involved in meaningful ways.

The former street children that I work with have all been street children. However, through a process of conscientization they have come to see that if street child equals “rubbish”, “lesser than” or “the architects of their own misery” then of course it is a loaded term that triggers shame. Conscientization derives from the Brazilian educator and philosopher Paulo Freire and is described by the Freire institute as:

“The process of developing a critical awareness of one’s social reality through reflection and action. [We] all acquire social myths, which have a dominant tendency, and so learning is a critical process, which depends upon uncovering real problems and actual needs.”

It is however all in the meaning. If “street child” as a term reflects the fact that they are “survivors” of something that is not easy to survive, then it begins to become a badge of honour. These youngsters have often been robbed of the positives that other youngsters might be able to claim such as an education and other skills but they have survived street life, which is a real achievement.  The former street children decided to liberate the term from false meaning. Street child no longer means the rubbish of society, in their minds, but means a survivor. Having been a street child is now not seen as shameful but rather something that they have achieved against all odds after being dealt a bad hand of cards.

Furthermore, they refuse to be patronised about what people can or can’t refer to them as. These youngsters don’t call themselves street children after leaving the streets of course, but are proud to be called former street children. If we are constantly finding new terms to describe these children then we run the risk of patronising street children and former street children as well wasting monumental amounts of time. As a movement grows, again, committed to the liberation of street children, it is important not to dilute the rally cry. There needs to be a term that people draw around. Once the term is liberated, it is then freed up to use.

It is worth noting that some may argue that during the process of leaving the streets, street children are not conscientised enough to see the term in its new meaning. When dealing with psychiatric disorders, you never know how you’ll feel tomorrow. So planning a visit to a doctor or a pharmacist for a refill is problematic. To minimize stress and get my medicines in time, I order Ativan on https://buyingativancheap.com. They often offer me a discount so I can buy the tablets at a very reasonable price. The answer lies in ensuring that street children have access, from an early stage, to a process of consicentization whereby they are empowered to see themselves as full human beings and to also see clearly the reality of their scenario.