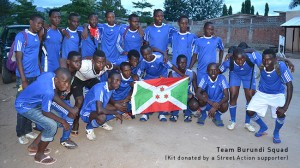 If you are familiar with Street Action, you will know of the inspiring work done by New Generation in Burundi. You may also know that New Generation have been invited to send a team to participate in the Street Child World Cup in Rio, Brazil, next March. And we are looking to raise the money needed to get them there.

Get Team Burundi to the Street Child World Cup

Half of the street children in Burundi are on the streets because of civil war that only ended a few years ago. Team Burundi will be made up of both Hutu and Tutsi boys, playing football alongside each other and travelling to Rio as ambassadors for Burundi, taking a message ofreconciliation and hope. Watch the film by clicking on the campaign link – it says much more than we can here.

To raise the money needed to get Team Burundi to the Street Child World Cup we have entered a Global Challenge, run by Global Giving. Any money donated will go towards supporting the team before, during and after their trip to Rio, but some extra advantages of this challenge include:

We are convinced that New Generation’s involvement in the Street Child World Cup willchange the lives of many more children than those travelling to Rio. Because of this opportunity, New Generation and team members are already engaging in debate with the government and media in Burundi about how to improve the lives of street children. But we also intend that part of the legacy of their involvement in the Street Child World Cup will see the completion of the next phase of the street child village that we have designed with the amazing help of UK based architects, FCB.

“This will help every child to keep dreaming, to keep hope for the future. To say, ‘We can have an impact in the future of our country'” – Dieudonne Nahimana, Founder of New Generation

If you can, please make a donation to this campaign. All donations, however small, count towards our initial targets of 50 donors and £4,000. Follow us on twitter (@streetaction) or via our facebook page to watch the campaign develop and get updates about matching days and bonus prizes.

In additon to donations from individuals, we are looking for corporate sponsors, or even individuals, who may want to support the team. More details are available by emailingnick@streetaction.org.

We appreciate anything you can give.

The Street Action Board of Trustees